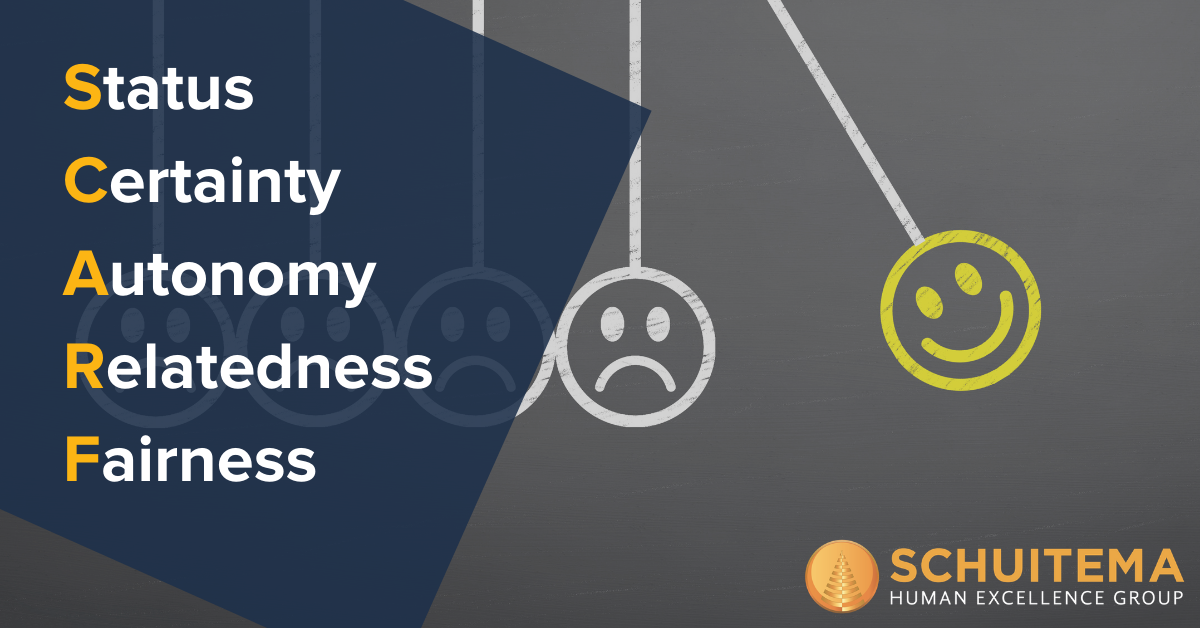 How to Influence People Using the SCARF Model

How to influence people: I recently had a coaching conversation with the Ops manager of an NGO doing charity work in informal settlements in the greater Johannesburg area of South Africa. The NGO does amazing work and has a noble purpose that typically attracts people of good character. Despite this, James (not his real name) was experiencing an ever increasing hostility between himself and one of his people. Every interaction seemed to further entrench the distance; and it was coming to the point that the relationship looked certain to break.

This is not a unique scenario. It is precisely this scenario and one’s like it that inspired the development of the SCARF Model. In this article, I will briefly explore how to influence people using the SCARF Model.

The SCARF Model and where it comes from

The SCARF Model was developed by David Rock in 2008 and was published in his paper “SCARF: A Brain Model for Collaborating with and Influencing Others“. It aims to understand the conditions under which people will respond either positively or negatively; particularly in work contexts in which one person is asking another person to do something. The model seeks to help us understand how to influence people.

The model rests on the minimize danger and maximize reward principle. This means that the brain only responds in one of two ways; it either has an approach response of an avoid response. The Amygdala, a small  collection of cells near the base of the brain, plays a central role in producing these responses. The responses themselves are pre-conscious. They are part of the brain’s processing of information prior to us becoming aware of it.

Things that invoke an avoid response, like a threatening boss, tend to have the following negative consequences:

Firstly, it diverts resources away from the pre-frontal cortex which has a negative impact on conscious cognitive processing. This makes us slower to respond and less able to problem solve.

In addition, the increased levels in the brain “overload” it and make it less able to perceive some of subtle things in the situation. This makes us less open to picking up on the small things around us that are helpful to making the right choice. This will also have a negative impact on creativity and innovative thinking. This is because it reduces our ability to think of alternatives.

Lastly, the avoid-response involves the perception of danger and makes people take the safe option. We become averse to taking risks and will shrink away from new opportunities. In the end, we will become less engaged in tasks, particularly if they are complex, and will be less effective as a result.

Unfortunately, the human brain has a bias towards the avoid-response.

This state will also include increased dopamine levels which is one of the feel good hormones of the brain. This means that the approach response will include positive emotions like happiness, joy and optimism.

How to influence people using the SCARF Model

SCARF stands for status, certainty, autonomy, relatedness & fairness. The model suggests that these are the 5 social domains that influence our behaviour in social contexts. Each of these domains have their own avoid-response and approach-response triggers.

How to influence people: Status

Status is about our relative standing to other people. It is always relative and is about how well we stack up to a specific person or group of people, at a specific, while doing a specific thing. We are constantly doing comparisons with those around us and forming mental “pecking orders”. The possibility of losing status and falling down the pecking order can produce a very strong threat response in people.

A status threat can be something as simple and innocuous as giving an instruction, giving feedback or publicly reprimanding someone. It is worth being mindful of this risk when faced with these situations. An emotionally aware person should be sensitive to the status dynamics at play in the situation. Ultimately, however, the risk is largely influenced by the degree of trust in the relationship.

On the other hand, status can be deliberately used to elicit a reward response. Giving positive feedback in public and paying attention to their performance and recognising improvements are both effective ways of producing a reward-response.

There is the risk that the these insights are used manipulatively, and there are people who will use them in that way. The positive message of the status domain however is that we should be careful with interactions that run the risk of making a person feel inferior; and, find as many opportunities to elevate the person’s self-esteem. This will contribute to them becoming the best they can be in that context. If this is the intent, then it becomes very powerful.

David Rock tells us that the brain craves certainty, and wants to find recognisable patterns in things. This allows the brain to make  the kinds of predictions that a very important in doing things in the world. When the brain senses uncertainty, it forces us to attend to the uncertainty. We have to then give the uncertainty conscious attention. When our uncertainty is large enough, it becomes debilitating.

It is important to manage uncertainty when interacting with people. This is very important in a work context. When handing over a task, it is important to shed as much light on it as possible. Help wherever possible to make them feel certain about the rules of the game and what needs to be done. Also, encourage them to demonstrate courage and resilience in the face of uncertainty. Facing uncertainty is, after all, an effective way of building character.

Autonomy is really about having choices. It is about having the right to make decisions that determine your circumstances. A perceived increase in autonomy is experienced as rewarding. The feeling of being in control is even associated with certain health benefits. This is why we emphasise empowerment in our leadership work.

There are many things that limit our autonomy. In a work context, it is controls that do this. All work environments put restrictions on what we can and can’t do. Many of these are legitimate. But, human beings have a bias towards control. This is because we are risk averse. The result of this is that our work environments very easily become over controlling.

This has a stifling effect on autonomy. People end up feeling constricted and suffocated in their jobs. Incrementally removing these controls where appropriate produces a reward response. This is why empowering work contexts tend to produce engaged people.

Relatedness is about being part of a group. It is about deciding whether someone is a friend or a foe. People naturally like to congregate around others they that give them a feeling of belonging. There is a very strong drive in human beings to be part of the group and to shun people who are not part of the group.

The decision of whether someone is friend or foe is pre-conscious, our brain decides before we are conscious of the decision. Meeting someone new often produces a threat response in the brain. We have a similar threat response when interacting with someone we do not trust.

The number one way to mitigate the threat response is to get to know one another. Familiarity breeds closeness and comfort. Also, very importantly from a leadership perspective, you have to remain trustworthy. This means that you must consistently do what is appropriate even when doing so is not in your immediate self-interest. No matter how well a person knows you, if they believe that you are untrustworthy, you will elicit a negative response from them.

David Rock argues that human beings find fair exchanges intrinsically rewarding. We have an innate propensity to enjoy doing what is appropriate, and witnessing others doing the same. Unfair exchanges on the other hand produce a strong threat-response.

Avoiding a fairness threat response is as simple, and as challenging, and being absolutely and consistently fair. In order to dissipate perceived unfairness where there is none is by being completely transparent. Transparency takes courage however and runs the risk of produces a threat-response in one of the other domains.

The best strategy is to be very clear on ground rules and expectations up front. Clarity here will facilitate transparency and, subsequently, fairness.

The SCARF Model is an immensely valuable tool to think through the neurological impact things will have on people. It therefore provides a framework for us to be deliberate about how we approach people as a leader.

One of the things that one has to be careful with when using the SCARF Model is the issue of intent. The model is positioned as a tool that teaches us how to influence people. Influencing a person can be both a benevolent or a malevolent thing, depending on the intent of the person who is doing the influencing.

When practically applying the model, it is important to clarify this to people. If a person has a self-serving intent, the SCARF model will be used in a manipulative way. Used in this way, the outcomes will not be sustainably positive. There is thus a primary question that lies underneath the effective use of the model: What are you trying to achieve as a leader? What is your intent?

Assad Schuitema is the CEO of Schuitema Group and responsible for oversight of global operations.

His work continues to rediscover the foundational themes that express themselves in all human endeavour and shape and define human collaboration.

When Leaders Fail to Lead – The Rise of Surrogate Management

What You Need to Do to Transform Your Business

Team Success and Having a Benevolent Intent

2 Comments to “ How to Influence People Using the SCARF Model”