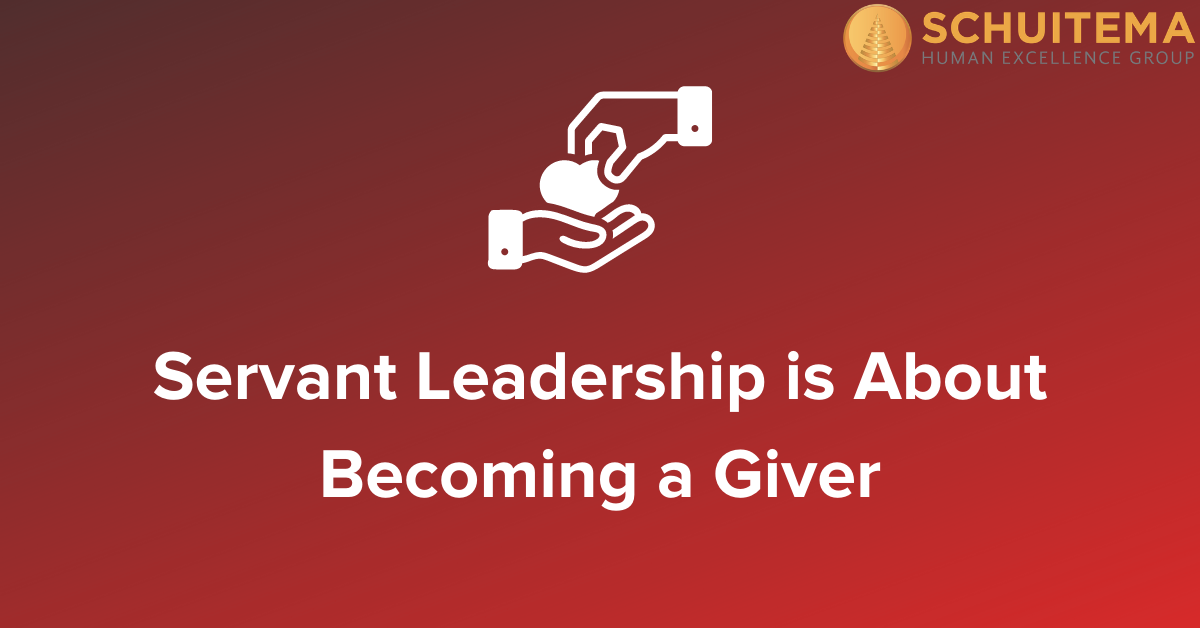 The Role of Servant Leadership in Business Success

Successful businesses are profitable, and a profit means that the enterprise has produced a surplus. But, what role does servant leadership have in this equation?

Well, a surplus only happens when people work together to produce something that is bigger than what each take out. In other words, surpluses exist when people give more than they take. This also means, by extension, that businesses succeed when people give more than they take. Exceptionally successful businesses are built on the basis of the unconditional contribution of people. Your business will take off only to the degree to which the people in the business are willing make a discretionary and unconditional contribution to the business.

This principle acknowledges that the person has a will and is capable of deliberately acting unconditionally. Such people, by definition, do not behave like cogs in a machine. Under these conditions, people become committed to the cause and act with creativity.

If we accept that the willingness to give is a key criteria for organisational success; then we need to understand how to cultivate this in our people. This is where servant leadership fits in. There are a number of conditions that account for the willingness of people; but in my experience the most significant is who is the boss. Servant leadership is an essential part of cultivating the conditions in which people work because they want to rather than because they have to. It is part of enabling the will to contribute in people.

I recently asked two groups of leaders from around the world; ‘what does the word leadership mean to you?’. Here is a verbatim list of responses I got to that question:

Integrity, An example to others, Motivates, servanthood, A chief connector, Inspirational, Set up people for success, Selfless, Aware of own behaviour, Setting direction, Engagement, Creating vision, The ability to influence others, Point out a direction, Role model, Emotional Intelligence, Compassion, Inspiring others to realize their full potential, Growing people, Inspiration generator, Guide, Coach, Giving resources, Direct people towards achieving a result, Set a vision, Be a role model, trust the people, Leading by including others, Trust, Integrity, Capability Builder, Creating psychological safety, Courage

There are two themes clearly visible in this definition of leadership. The first theme has to do with people. This includes elements such as servanthood, or setting people up for success, or growing people. The second theme has to do with an outcome or a result. This includes ideas such as setting direction, or influencing others, or creating a vision.

This is not unique. Whenever you ask this question, you will have these two variables coming up. Interestingly, these two variables are also set up in particular means and ends pattern. This is more clearly discernible in some definitions. As one of the delegates indicated: Leadership is about directing people toward achieving a result. In short, we get something along these lines:

“Leadership is about achieving a result through people.”

This idea of what leadership means disables commitment because it is about taking. People do not give to takers. I can demonstrate this with a simple thought experiment.

Fred will probably work because he has to and Joe will work because he wants to. If you want to account for the difference, it is clear, in the first instant, that you are being rather autocratic and dictatorial with Fred. You are being much more collaborative and democratic with Joe. This is true, but it is not the whole truth. It does not cut deeply enough to truly make sense of what is going on.

To really understand the difference, we need to distinguish between two variables, means and ends, and put either the person or result in either category.

In the Fred case it is clear that your end is to get the job done, and that you were using Fred as your means, your resource to that end. In the Joe case, you could have a completely different outcome than you had in 2000. It may conceivably even be a catastrophe. This suggests that your end is not just to get the job done, because you are willing to put that at risk. Rather, your end is to teach Fred something. Yours means to do so is the job that he is doing.

To get a definition of leadership that is consistent with the Joe interaction , we have to say something like this:

“Leadership is about achieving people through results.”

The Leader as Coach

This statement is not as outrageous as it may appear. We can actually recognise many instances where this is precisely what is required. This is exactly what a coach does. Let’s engage another thought experiment.

Let us assume that you are a player in a football team that is doing stupendously well because you have an extraordinary coach. Unfortunately for the team, this coach dies of a dreaded disease and the club has to source a new coach. On the first day that the new coach joins the team he assembles the team in the change-room of the club and announces: ‘listen up, team, my job as coach is to achieve a result and I am going to use you, the players, as my resources to do that.’

If, at this point, you thought that this coach actually believes what he is saying, you are likely to be very disgruntled. The last thing you will be inclined to do for this person is play with commitment.

The reason for this is that it is clearly not the coach’s job to achieve a result, that’s what the player does. The coaches’ job, rather, is to coach the player. That does not suggest that the coach has no interest in the game that is being played or the results that are being achieved. Those two things, however, are not his job, they are the means for him to do his job, which is to coach the player. The coach quite literally achieves a player thorough result.

If you are a Leader, then your Deliverable is Excellent People

The penny that needs to drop in the consciousness of a leader is that she is not to here achieve a result. Rather, her deliverable is an extraordinary, committed subordinate and the organization and the job that is being done is a gymnasium dedicated to this end. When she achieves this flip of means and ends in her mind she indeed cultivates people who come to work to make a discretionary and unconditional contribution to the organization because her own intent has shifted from taking to giving.

The Thing That Self-Help Books Don’t Tell You